It’s been twelve months since I’ve typed those words and shared an interesting travel experience with you. This little adventure to Spain also fulfills April’s “Never done THIS Before” Challenge. Initially, I expected my new experience to include viewing the Semana Santa (Holy Week) processions and relying on my Spanish to navigate. (I was attempting to use English as little as possible.)  But, boy-oh-boy-oh-boy, we got a little more “experience” than we expected.

Is that enough for you? Or do you want the long story? LOL

Here goes . . . My husband and I travel quite a bit and let me just say in the grand scheme of airplane travel karma, we were probably due for some issues, and when it all begins with bad weather, there’s really no one to blame. You just need to make the best of it.

The day we were to depart a serious band of thunderstorms hit the Atlanta area—as a hub for Delta this was bad news for many Delta flights. A full stop on traffic in and out of Atlanta had a ripple effect that lasted for days and included at least 3000 canceled flights.  Luckily, the smart gate agent in Madison (WI), realized it’d be unlikely we’d make our connection to our Madrid flight and rebooked us on a later flight to Madrid via Paris. And thank goodness she did, because when we finally landing in Atlanta we couldn’t pull into a gate . . . all the gates were full with other airplanes. When we did pull in, we dashed to the gate for the Paris flight and found it still there. We got our boarding passes and a voucher for the boarding passes we’d need to pick up in Paris. We should have been suspicious of this little carbon copy piece of paper, but we didn’t ask any questions as we were so glad to be on a flight that was at least going to the right continent. We ended up siting on the tarmac for two hours while the next band of thunderstorms rolled through. When we landed in Paris eight hours later, our flight to Madrid was long gone, but my trusty iPad told me there were more flights to be had, so we went to the AirFrance rebooking desk with high hopes.

“Can I have your boarding passes for zee flight you missed?” the agent asked.

“We don’t have boarding passes. They couldn’t print them out in Atlanta, but they gave us this instead and said this would get us our boarding passes,” we said, handing over the weird carbon form.

“I don’t know what zees is,” said the agent. “I need zee other part. Zee part with your ticket number.”

“Zat is a problem,” the agent says. “I don’t know how to find you in zee system without zis number.”

I’ll spare you the continued play by play, but suffice it to say that after keying in all of our information from the printed KLM/Delta receipt and a call to the Delta folks, it appeared we had two seats on a flight to Madrid that afternoon after a Delta lady came over to the AirFrance desk with her handy stamper which made our crazy carbon form official in some way. PHEW!

In Madrid, our bags weren’t there. (Neustro equipaje no esta aqui.) We filled out the lost baggage claim and headed to the train station, hoping to exchange our 11 am tickets to Sevilla for 11 pm tickets—the last train of the night.  The basic gist of the conversation was . . . that’s not possible and the train is full. (No es possible. El tren es lleno.) There went one night’s hotel cost down the drain, and it appeared we’d need to buy new tickets even though I had purposely bought first-class tickets that were changeable in the event there was a problem with our airplane travel. Shoulders squared and carry-on luggage in tow, we approached the ticket kiosks. We could handle this, right???  Um, not so much. Apparently, the RENFE Train ticket system in Spain HATES non-EU credit cards. A LOT! We decide to go to the customer service area. We knew we need to take a number but the machine had no more numbers. (La machina no tiene mas numeros.) Near tears, (me, not my husband) I realized we were done for the night. After 30 hours of travel, we needed sleep and went to the hotel where we already had reservations for later in the trip. The desk clerk was delightful and explained that RENFE is mean to everyone, and she could certainly book our tickets for the morning and print them out for us. “Muchas Gracias!!” Problem solved. 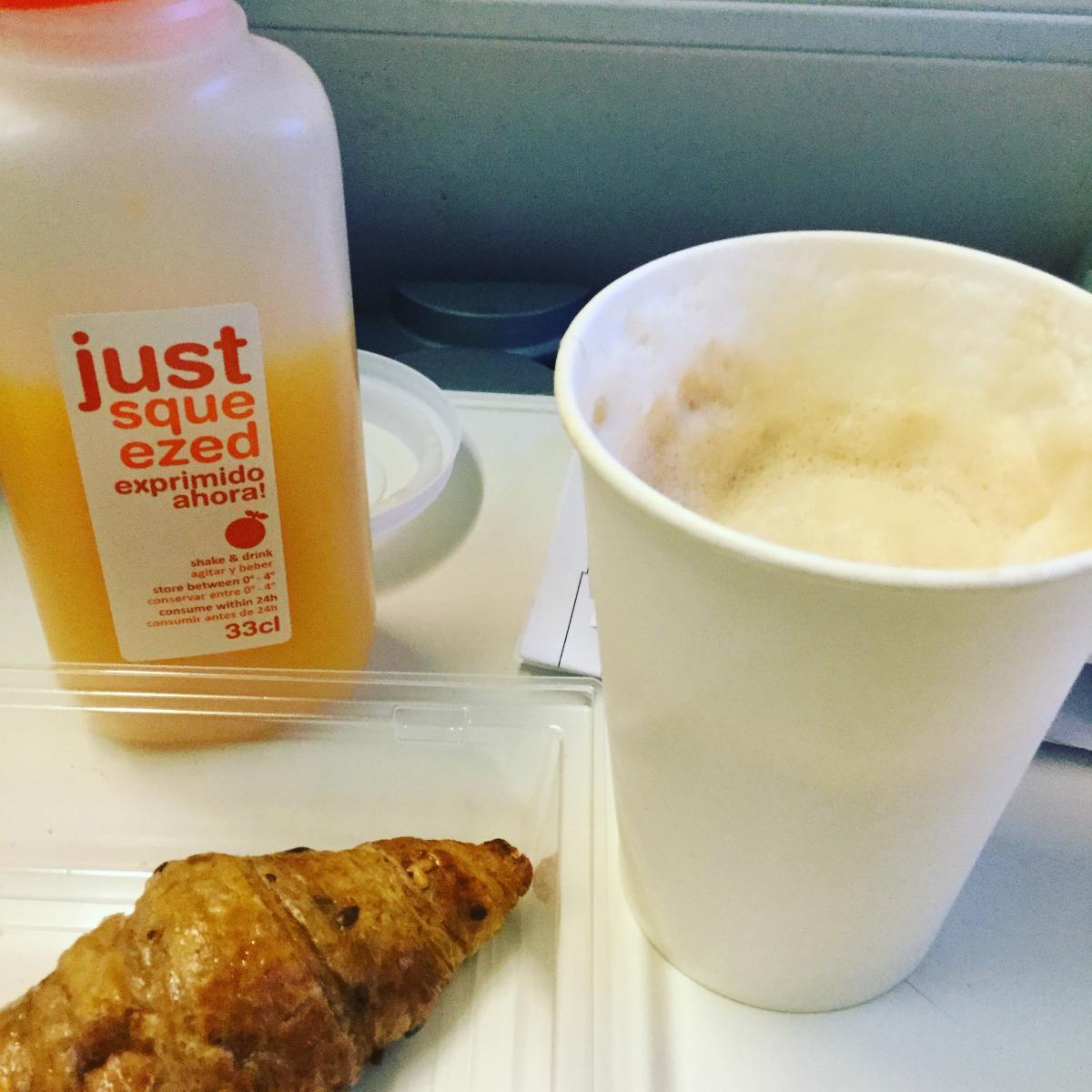 A little sink laundry and two magherita pizzas later, we felt much more human. The next morning, we were ready to tackle the world—especially after a cappuccino, croissant, and freshly squeezed oj.

(Now the real vacation begins!) Sevilla is home to the third largest cathedral in Europe (St. Peter’s in Rome and St. Paul’s in London are bigger). It is, however, the largest Gothic church in the world. It sits on the site of a mosque which was torn down in 1401.  You can see for yourself in these amazing pictures. 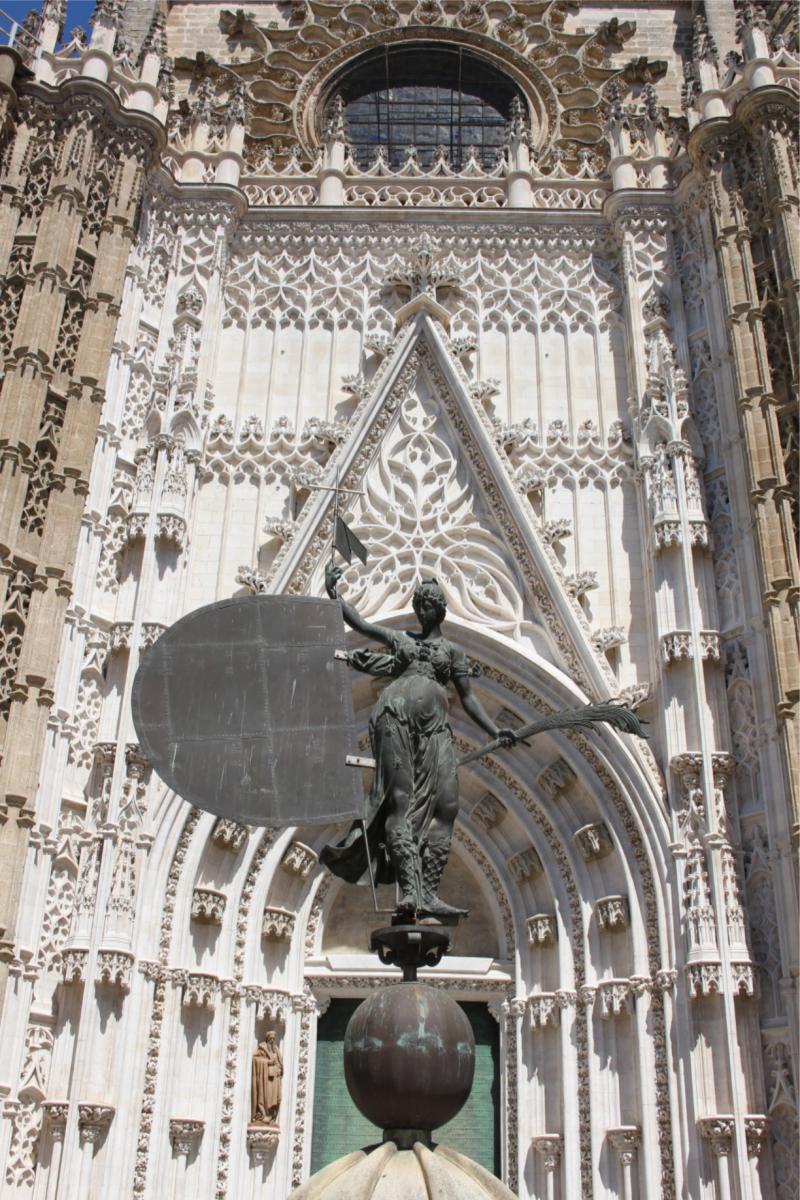 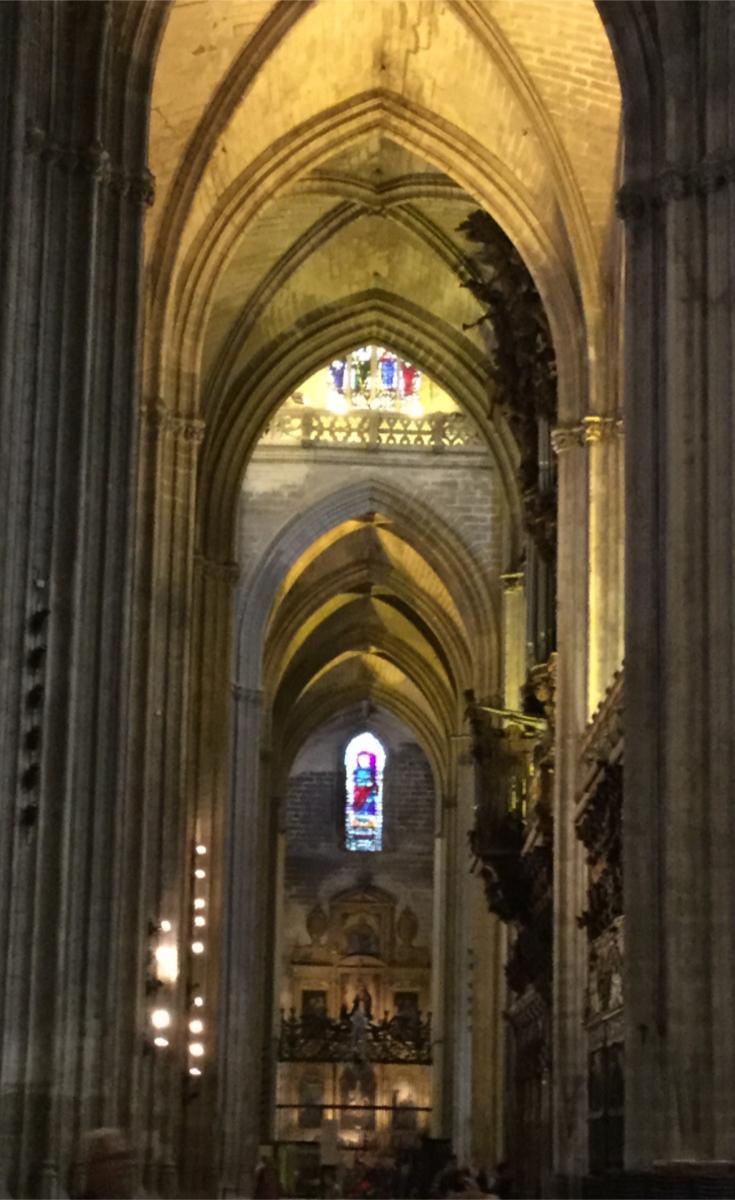 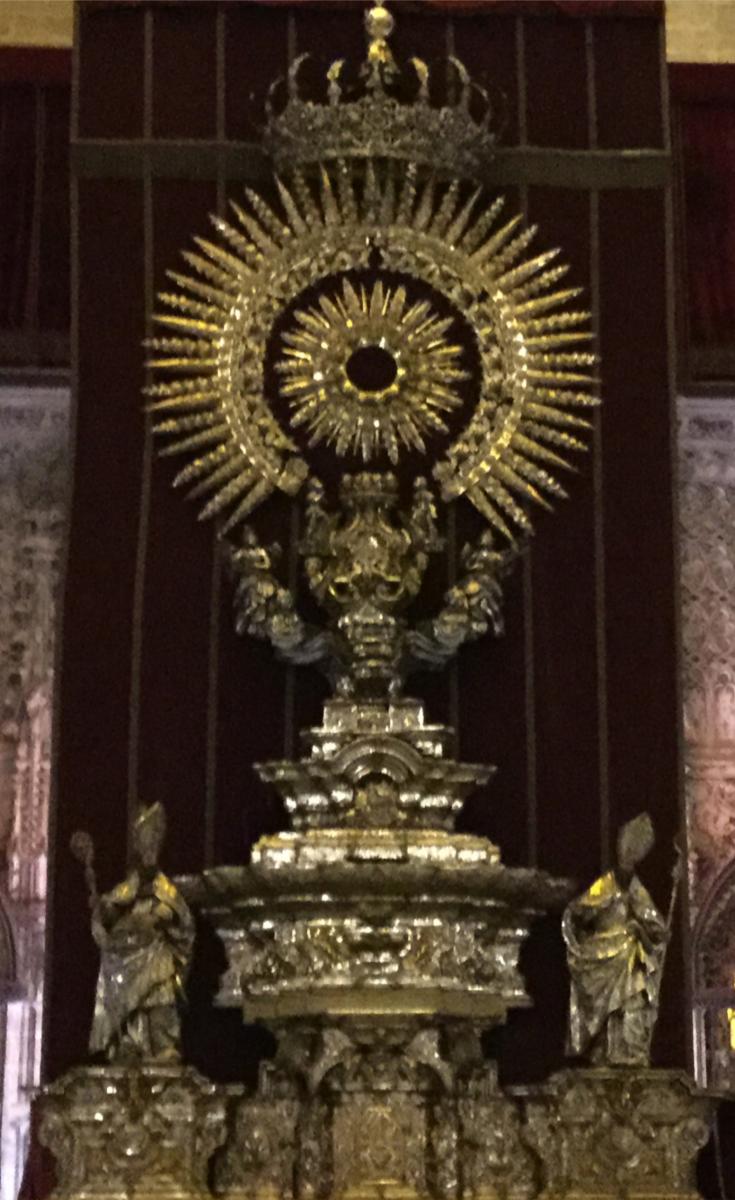 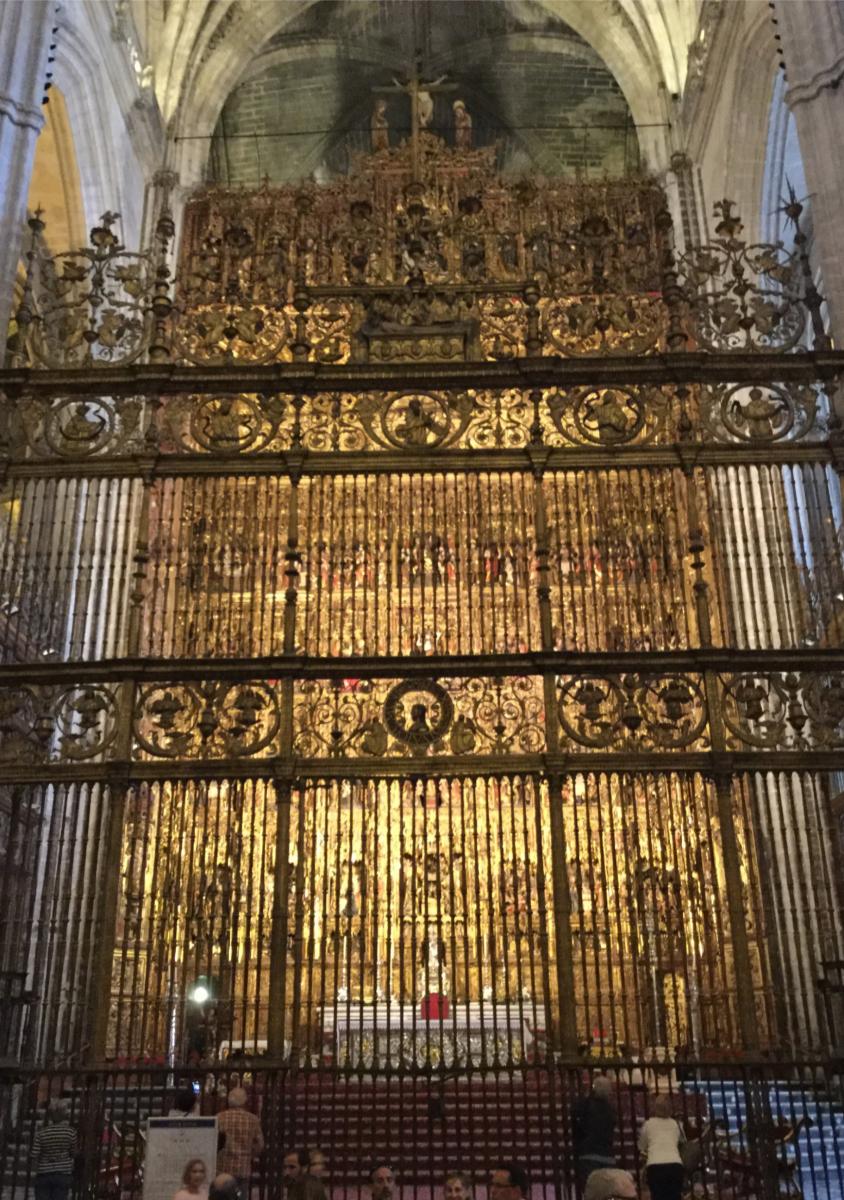 The Court of the Orange Trees is a remnant from the earlier mosque’s Patio de los Naranjos, as seen here from the Giralda bell tower—which was also part of the earlier mosque structure. (Today- by law- no building in the center of Sevilla may be higher than the statue on top of this tower.) In these views of Sevilla from the bell tower you can see part of the Alcazar and the bull fighting arena in the distance. And here you can see we are much happier travelers than we were the previous evening! 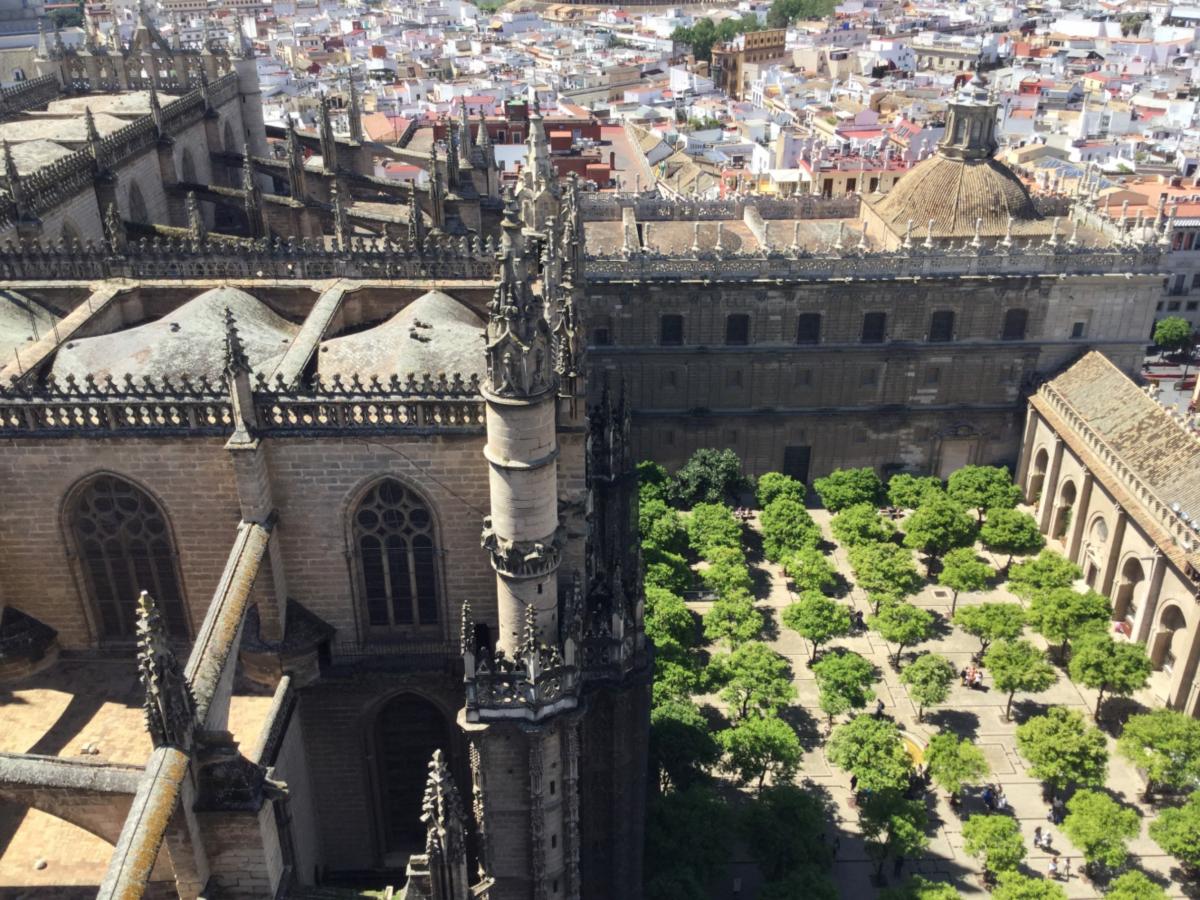 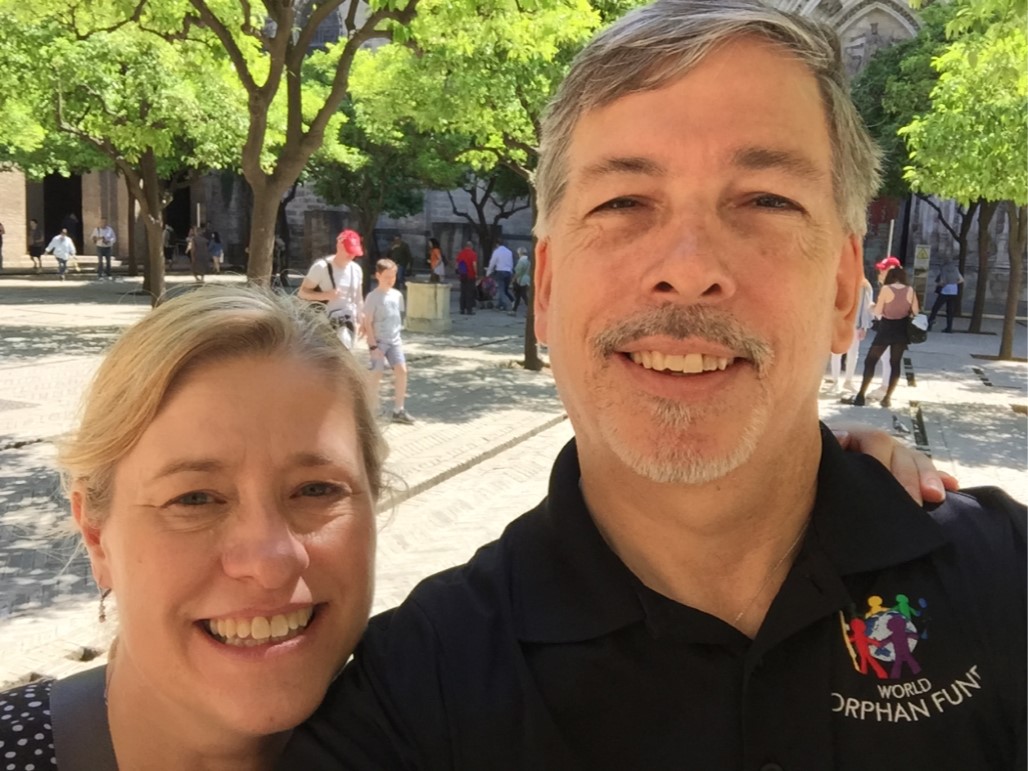 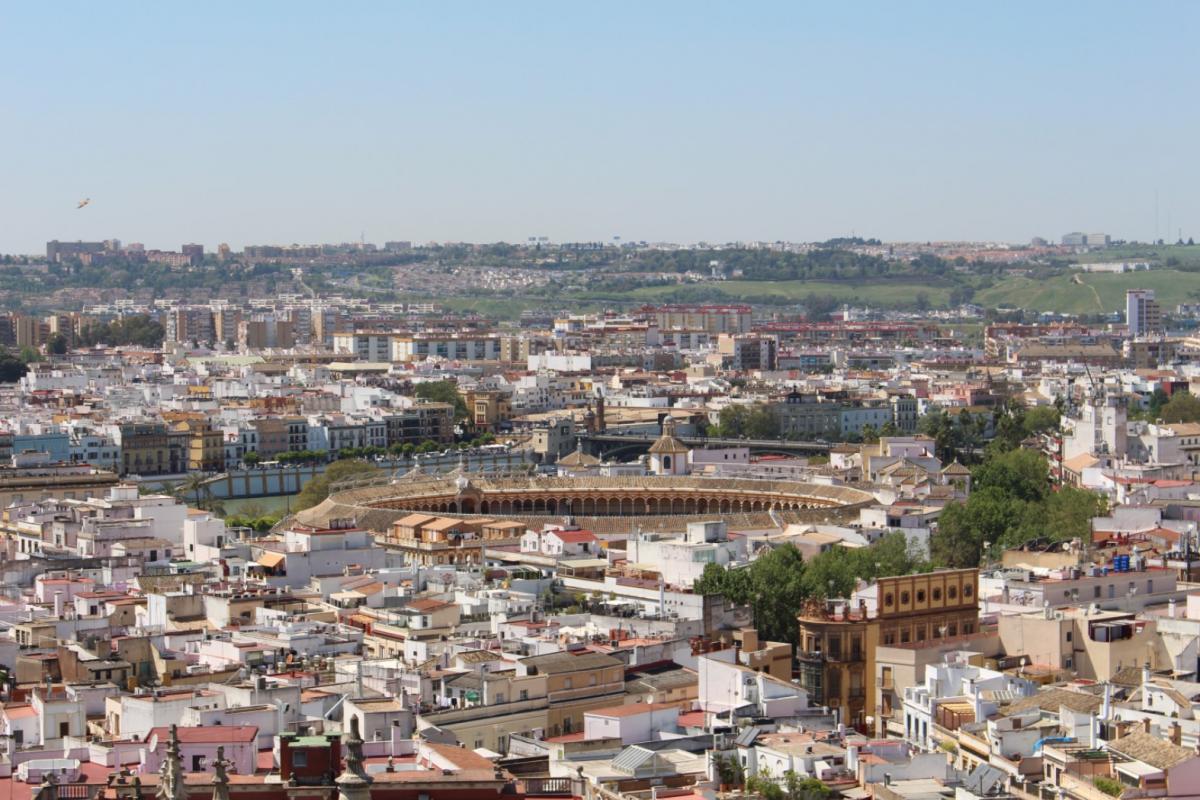 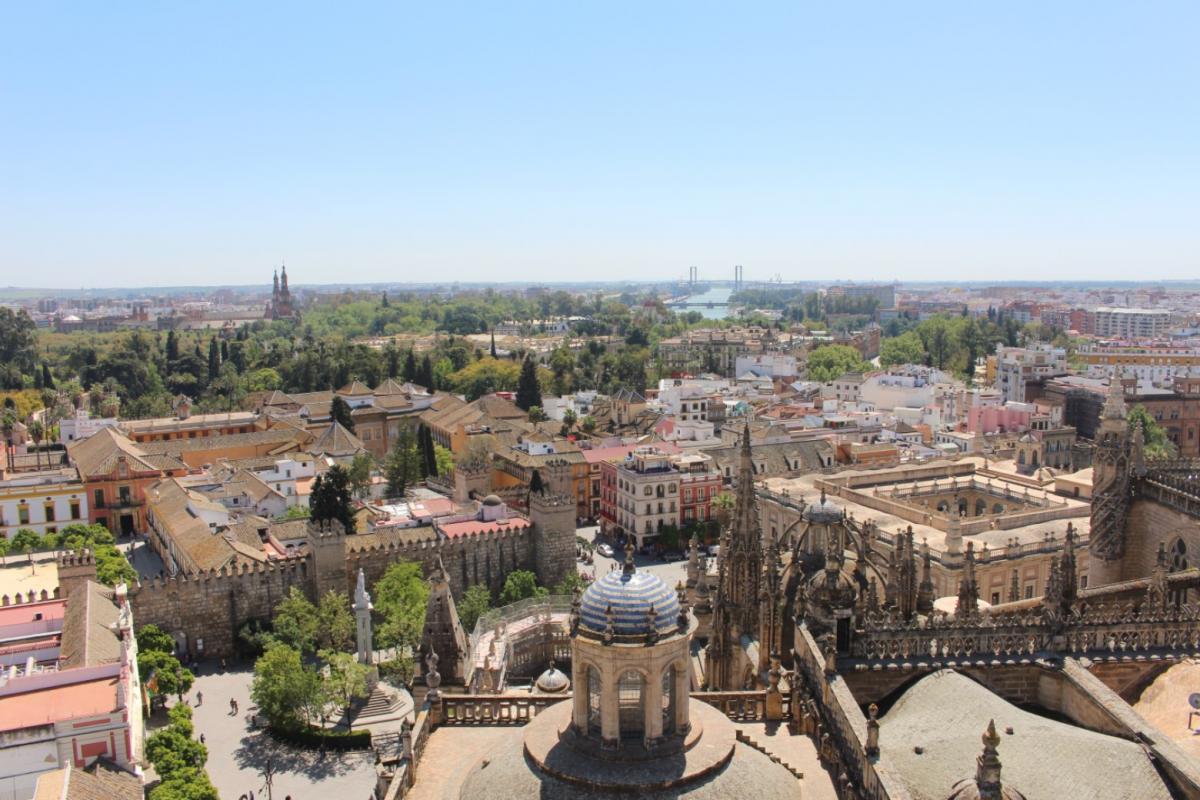 The Alcazar was originally a 10th-century palace built for the leaders of the local Moorish state and what’s neat is that it still functions as a royal palace—the oldest in use in Europe. The Islamic-style or Mudejar architecture is beautifully detailed and the gardens seem to go on forever. (There are orange trees everywhere.) 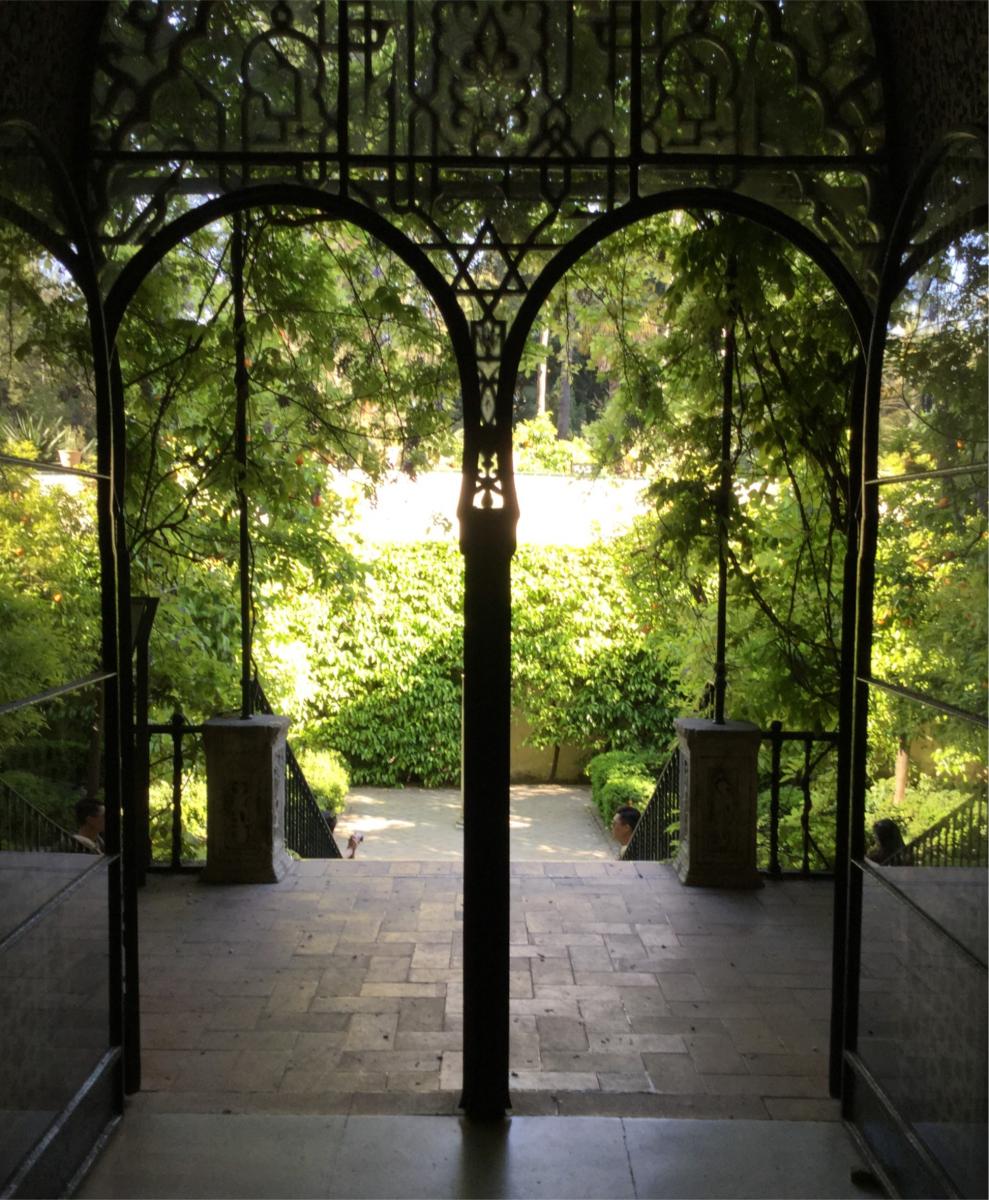 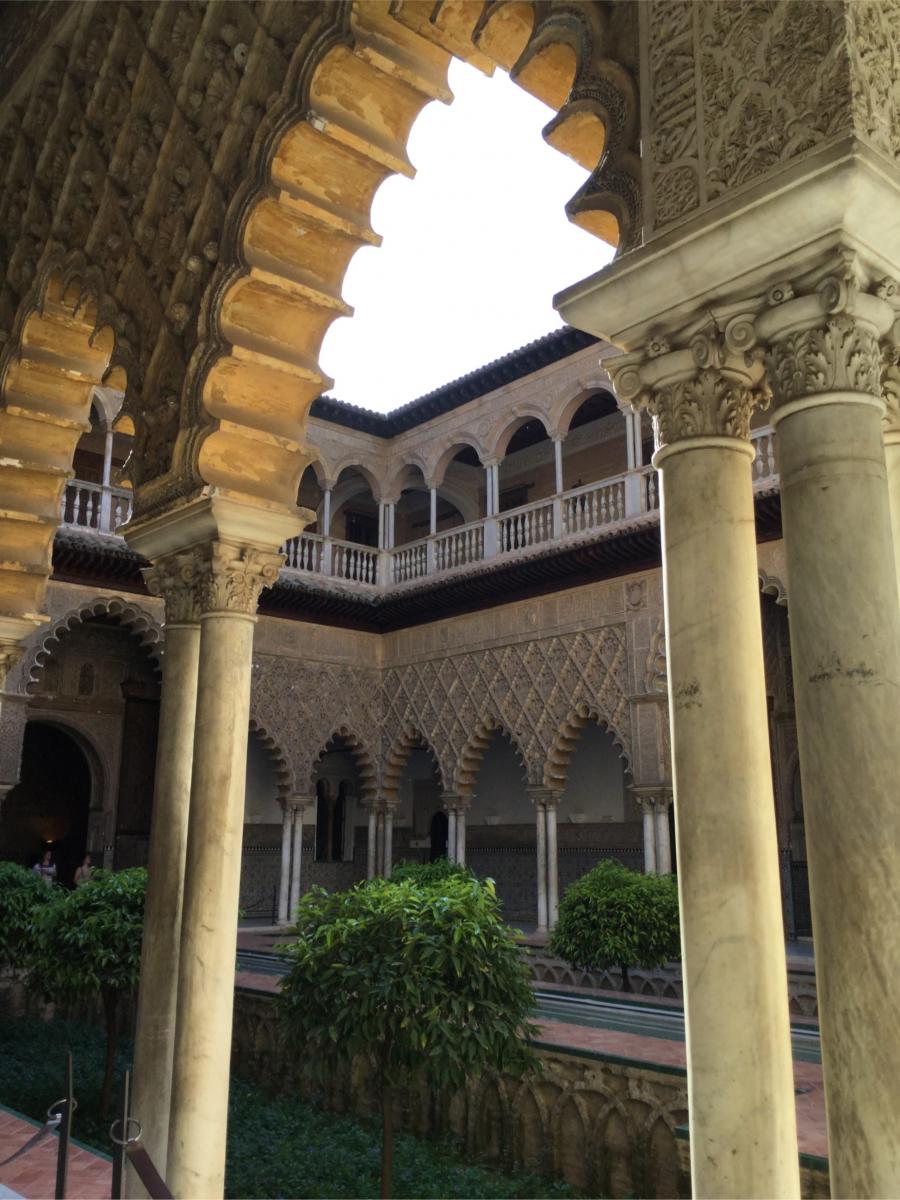 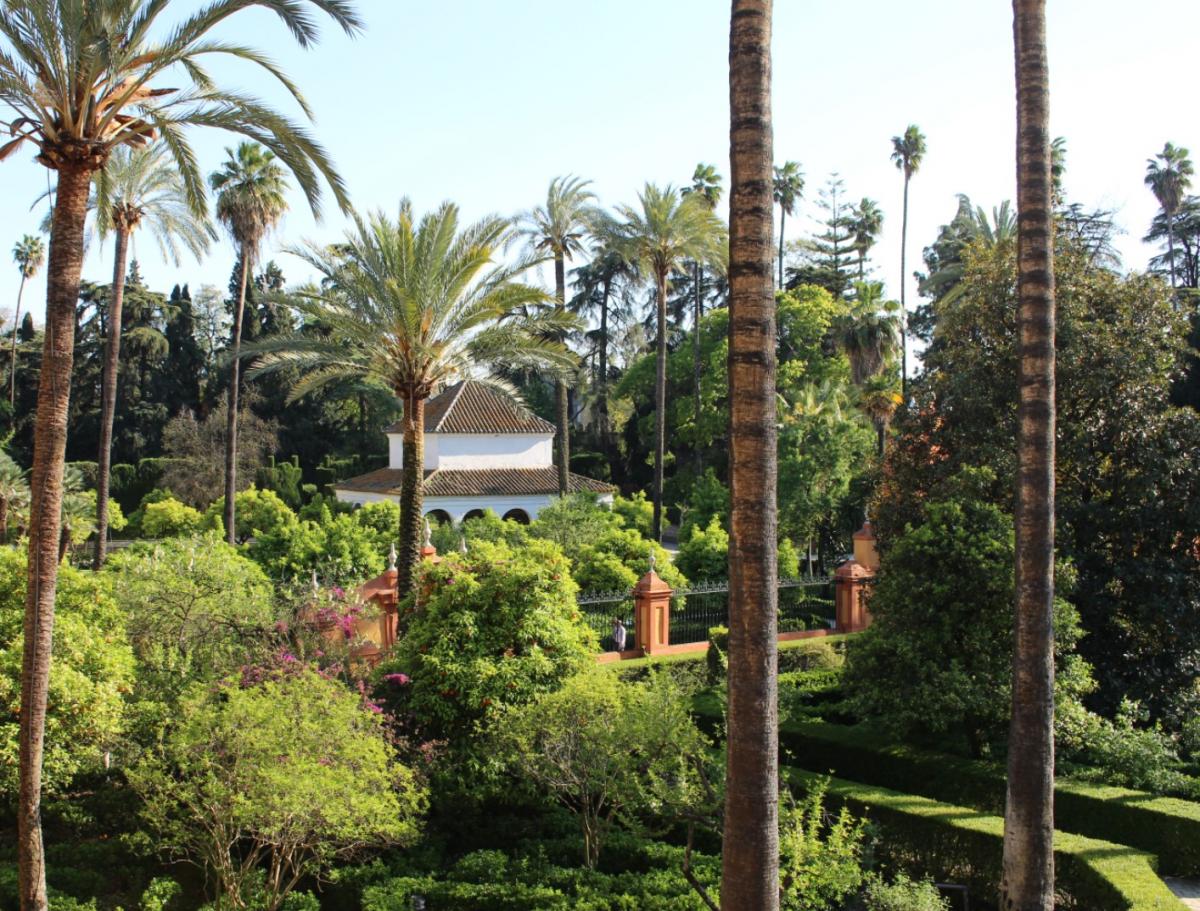 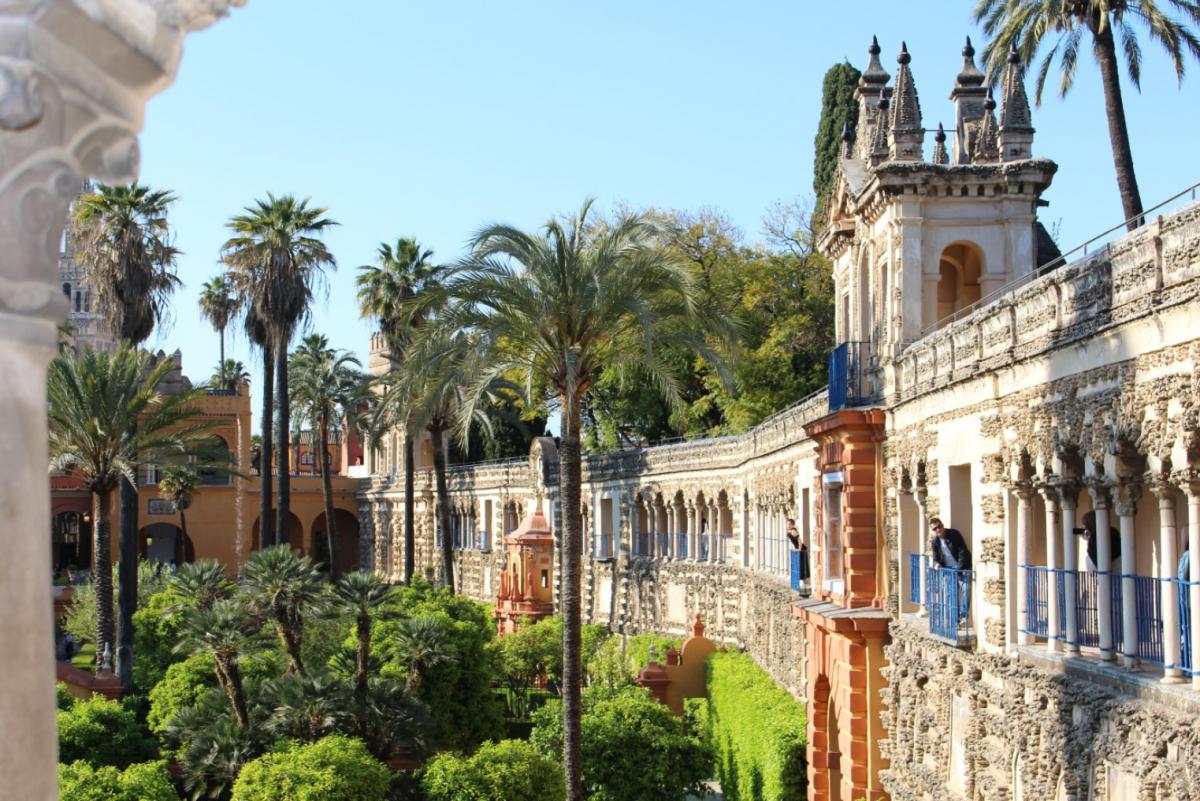 I SHOULD HAVE JUST BOUGHT A DRESS!

We checked back at the hotel and there was no bag delivery from the airline. (big sigh) I looked down at the bagged-out knees of my travel leggings and knew shopping was next on the list. El Corte Ingles is a big department store that was recommended to us by our hotel. I explained that the airline lost our luggage. (La linea aerea perdio el equipaje.) This elicited sympathetic nods and assistance from helpful sales people. However, let me tell you, ladies, if you don’t appreciate clothes shopping in the U.S., you will not be happy doing this in a foreign country where you have to convert size charts and then guess. UGH! I just wanted a pair of jeans and a shirt. In the end, yes, I must admit, there were a few dressing-room tears but ultimately -- success!

The next day we took an early train to Granada. We stayed at the absolutely stunningly gorgeous Alhambra Palace Hotel with views of the city. 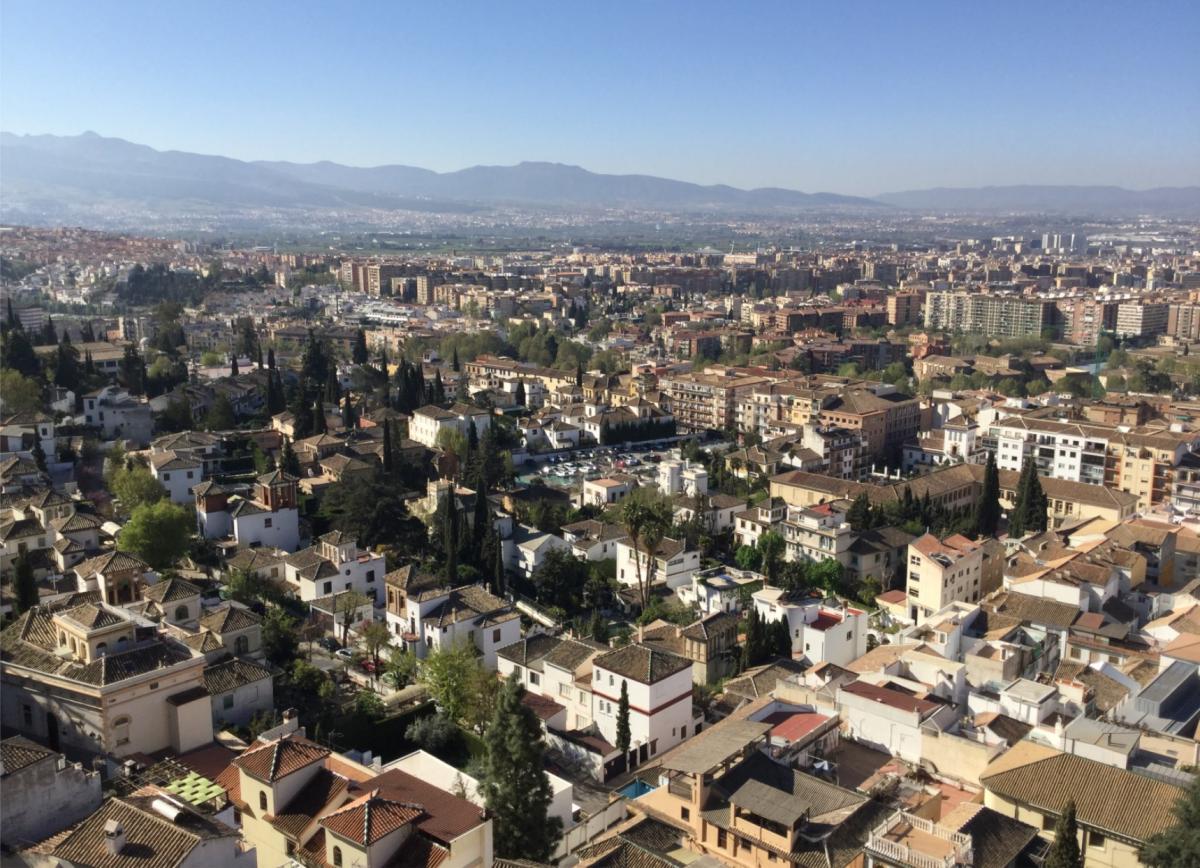 Touring the Alhambra was rather magical. It was the last Moorish stronghold in Europe where the Nazarids (an ethnically diverse group of Spanish Muslims) ruled until 1492. Their grand palace (Palacio Nazaries) had stunning architecture. The gardens here are massive and, again, beautiful. We were lucky to be here in the spring. 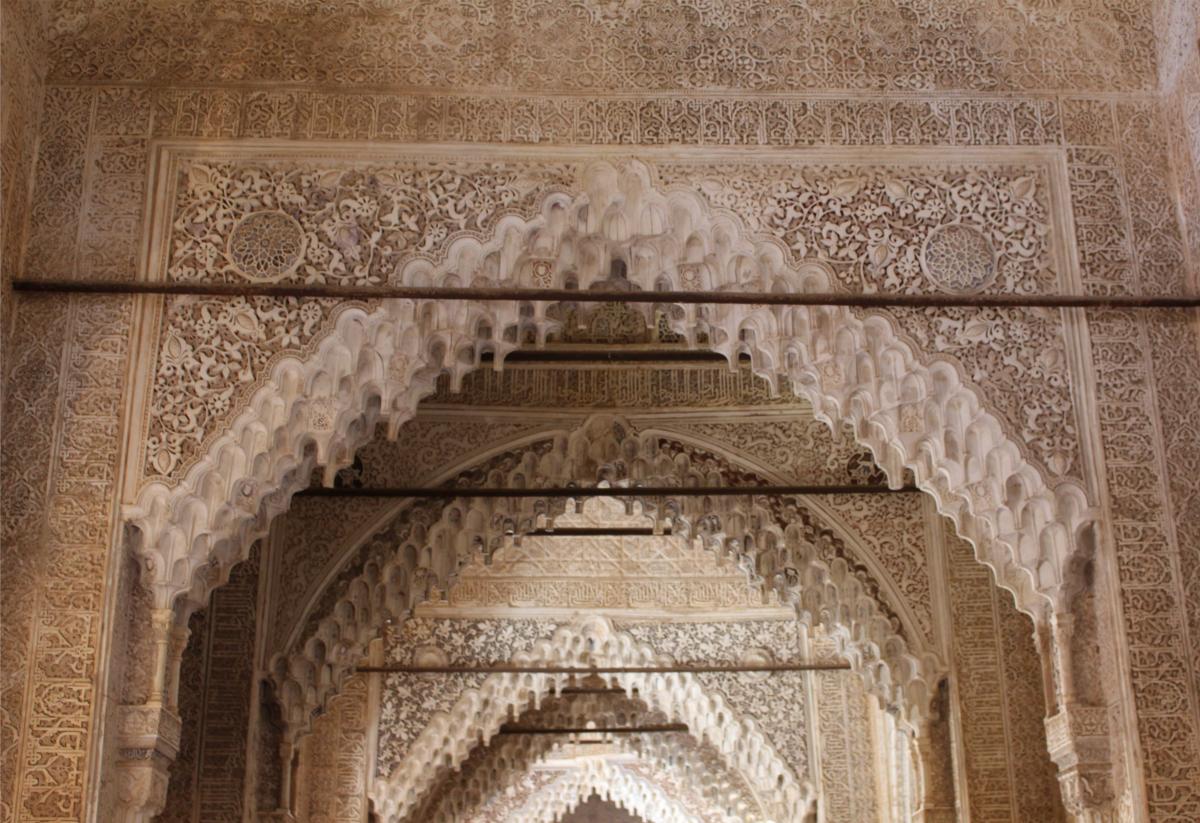 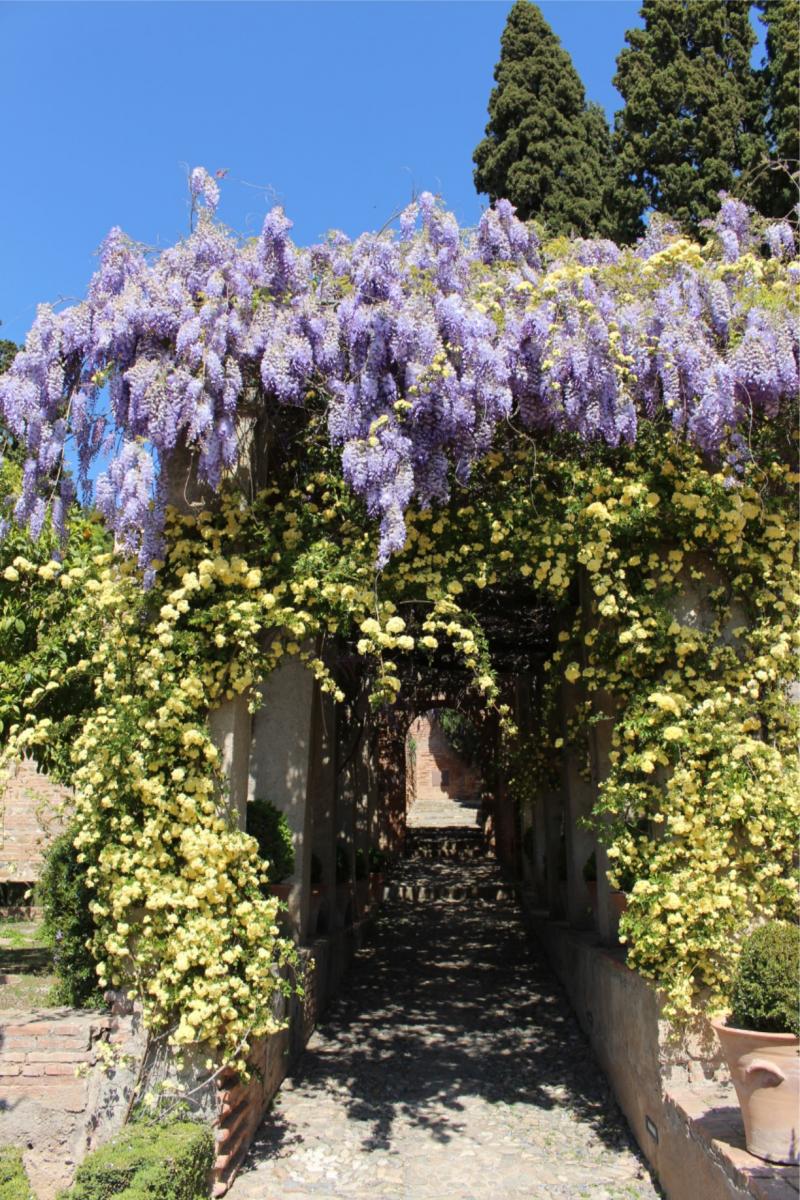 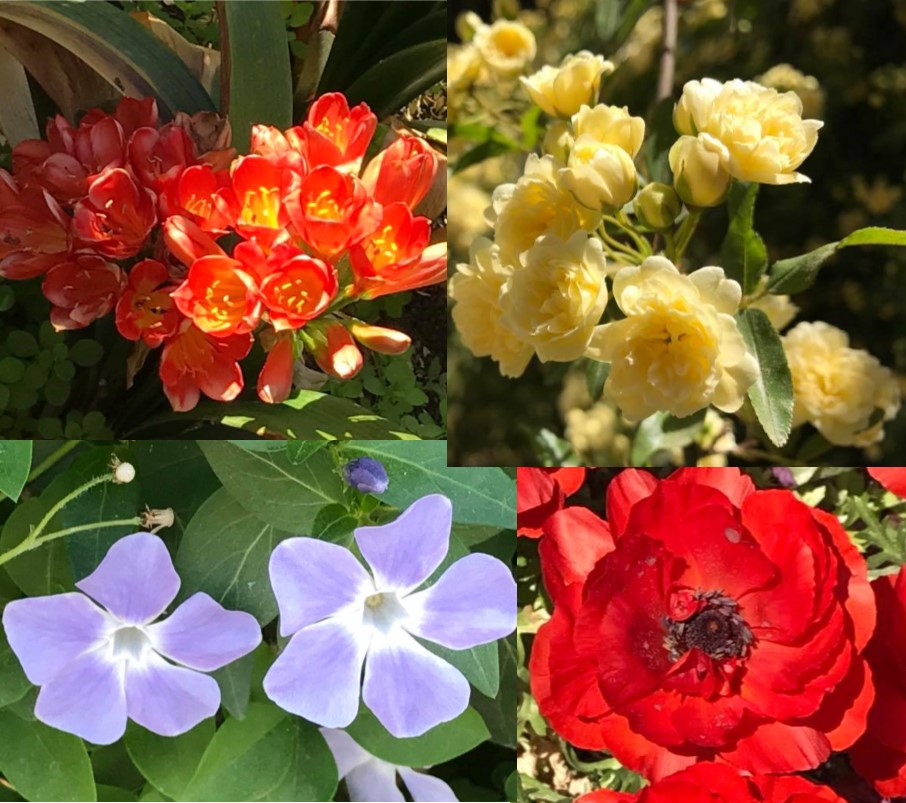 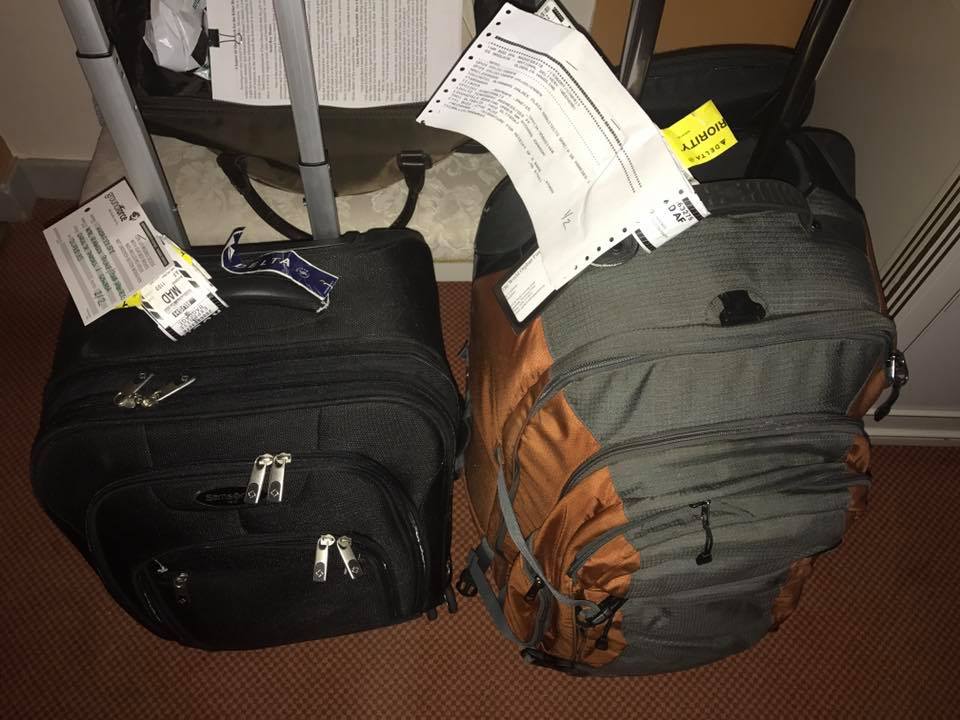 Our primary reason for timing our trip this way, was to see the elaborate Semana Santa processions in Granada in particular. The processions have two floats, one that depicts Jesus, typically in a holy week setting and the other that reveres the Virgin Mary. These processions include many, many people . . . just to carry one of these incredibly heavy (2000+ lb) floats you need a team of 24 to 48 men. Is this part of Spain, you can’t see them as the floats are skirted. The cloaked and hooded figures are a common feature as well. The robe is called a nazareno the hood is called a capirote and are used to conceal the face of the wearer or penitent so the person can demonstrate their penance while still masking their identity. They carry processional candles or crosses and some may walk the streets barefoot or with shackles on their feet as a further demonstration of their penance. 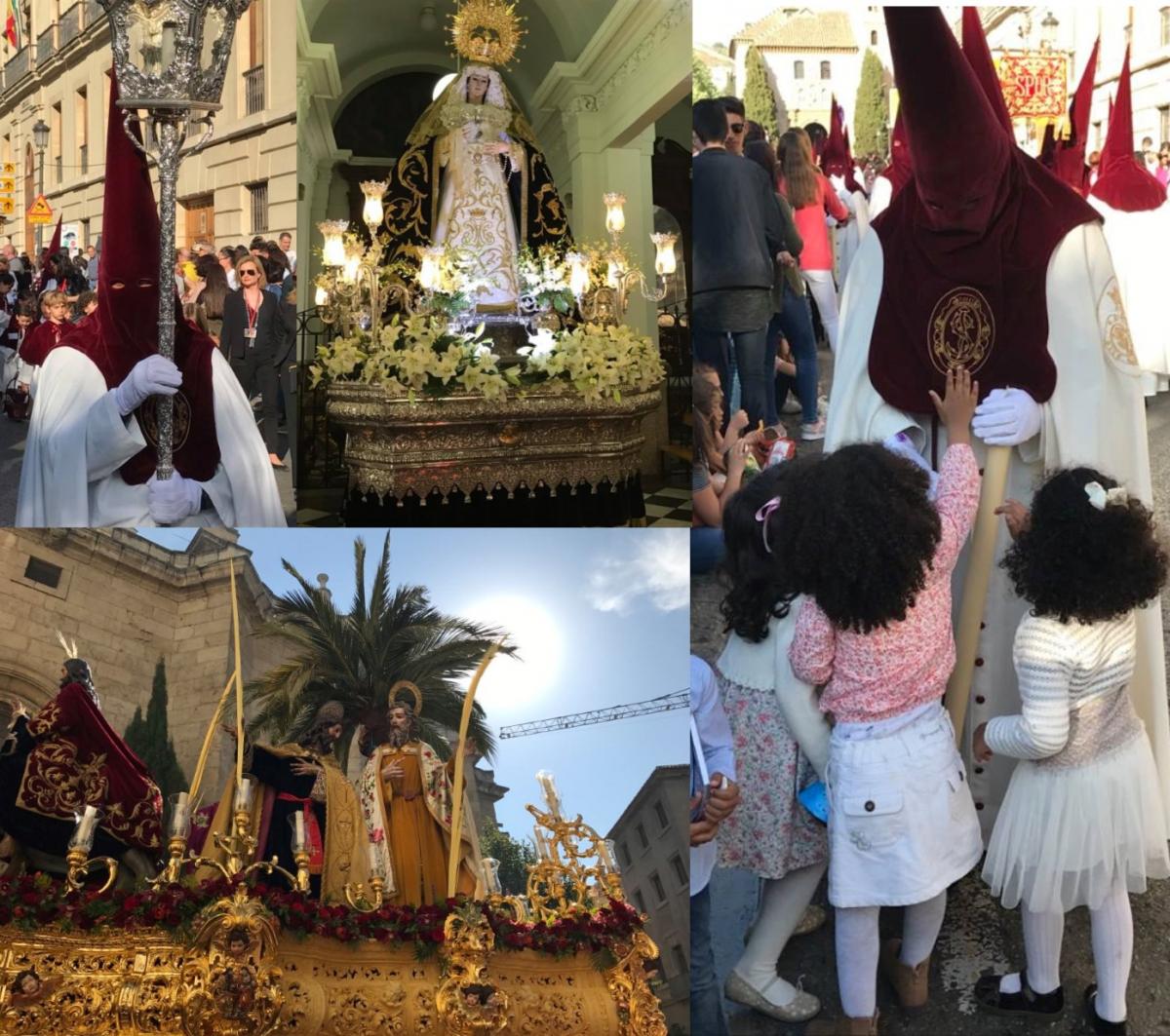 Cordoba’s winding alleyways are kind of tricky to navigate, but rather charming in their own way. The main reason to visit Cordoba is the Mezquita . . . a mosque which dates from 784 AD and has at its center a full-sized 16th century church. Two things are remarkable here: 1. That the Christians didn’t tear down the mosque as they had in so many other Moorish cities. 2. And that the placement of an elaborate church in the center of the mosque creates the most intriguing architectural pairing I have ever seen. 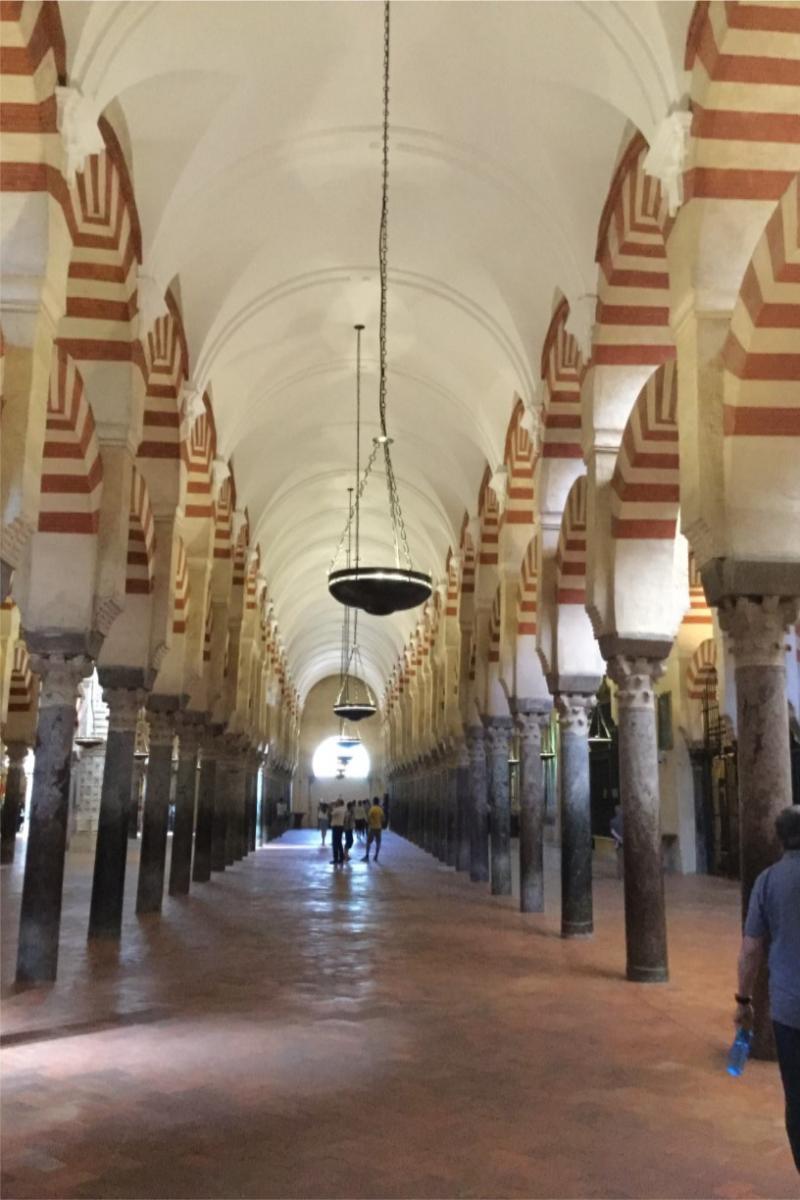 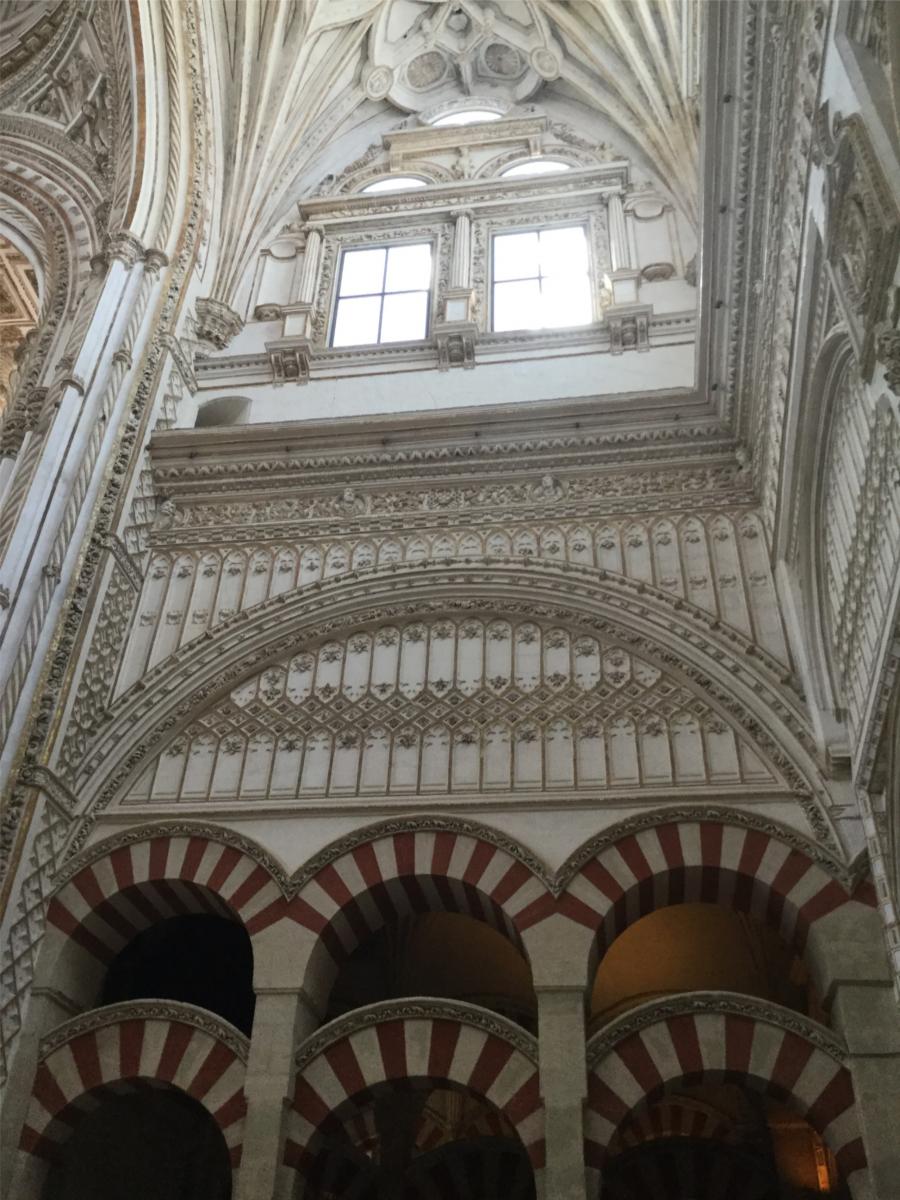 In Madrid, we returned to our (now favorite) hotel (The Hotel Urban), savored the city’s restaurants, enjoyed countless paintings in the Prado, and wandered the paths of both Madrid’s botanical garden and its seemingly-endless Parque del Buen Retiro. (the park of the good retreat).

However, the best part of our Madrid experience was waiting for the Holy Thursday procession in the Plaza Mayor where we made friends with a mom and son from Venezuela who now live in Madrid. Our conversation was incredibly informative as we discussed the rapidly deteriorating situation in Venezuela and the details of the procession we were about to see. The floats in Andalusia to the south all have skirts that hide the “carriers” from view. However, here in Madrid, the floats have three long beams that emerge from both ends of the float. It’s from these extended section of the beams that we see the carriers shuffling with immense effort belly to back in a slow rhythmic sway for up to three or four hours, depending on the length of the route. The effort expended is clearly visible on their faces. 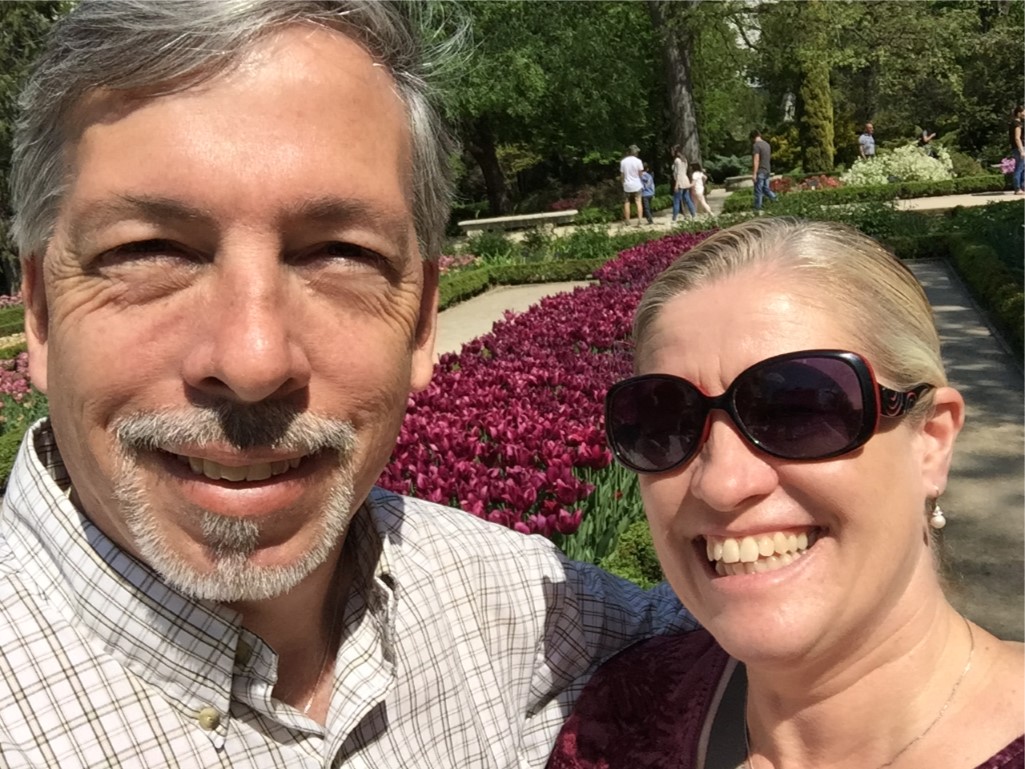 While the week started a little rough, our trip ended up being an incredible experience. We learned a lot and had so much fun getting a taste of Spain. And my Spanish is “mucho mejor”.

However, there was some weird travel symmetry with our trip ending a little bit like it had started with a delayed plane and delayed luggage, but at least this time we were on our way home and it didn’t matter so much. The luggage did show up the next day. “So all’s well that ends well.”