Listen to the playlist for

Listen to the author's
BOOK NOOK Segment
on WBEV. 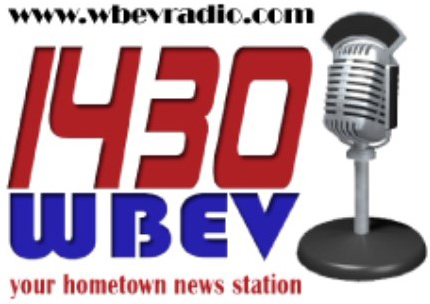 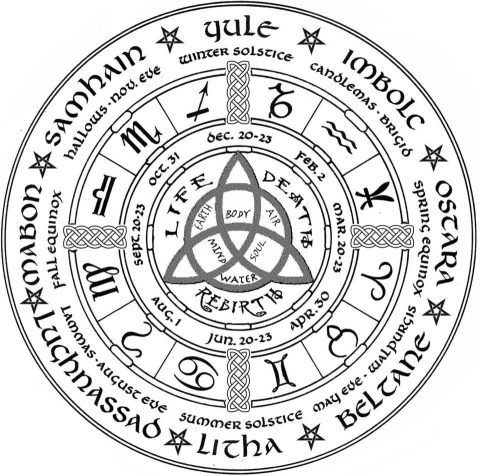 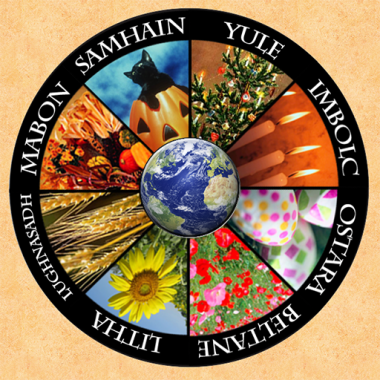 Wheel of the Year

The Celtic Eightfold Wheel of the Year recognizes eight different times during the yearly cycle that are significant and marked by celebration dates. In pre-Christian tradition they are in order; Samhain, Yule, Imbolc, Ostara, Beltane, Summer Solstice or Litha, Lammas or Lughnassa, and Autumn Equinox or Mabon.

Samhain (sow-een) is the Pagan New Year and is celebrated October 31 to November 1. It’s the midpoint between the Autumn Equinox and the Winter Solstice. Celebrations include the remembrance of the spirits that have passed and include ceremonies where all fires are extinguished and relit from a sacred bonfire.

Yule is the Winter Solstice and is celebrated on December 21, the shortest day and longest night of the year. The holiday celebrate the end of darkness and the gradually returning light as days begin to get longer. Typical celebrations include greenery like pine boughs and mistletoe or a Yule tree. Twelve days after the solstice in many traditions the greens used to celebrate the holiday are burned.

It’s important to note that the ancient megalithic sites like Newgrange and Stonehenge are oriented to both the Winter and Summer Solstices, so we know how important these two holidays were to the Pagan year.

Imbolc is the midpoint between the Winter Solstice and the Spring Equinox and is celebrated on February 2. This festival celebrates first stirrings of spring and is dedicated to goddess Brigid, the daughter of one of the Tuatha de Danann(one of the mythical founding tribes of Ireland). Celebrations include the cleaning of the home as a purification to be ready for the new growing season and ceremonies involving water and candles.

Ostara is the Spring Equinox celebrated on March 21, a day of equal light and equal dark. The celebration is one of rebirth and renewed fertility of the land. Traditions include coloring eggs, decorating with flowers, and preparing special foods.

Beltane or May Day is celebrated on May 1 and is the beginning of the light half of the year, directly opposite Samhain. In Old Irish, Beltane means bright fire and indeed, a bonfire is part of this celebration along with traditionally large tribal gatherings. The festival is also one of fertility as people asked for blessing of strong crops and healthy livestock. The fertility ritual extends to people as this is a popular time of weddings and handfastings. Beltany, the stone circle in Ireland that lends its location to my novel, was certainly a place where people celebrated this holiday.

Litha is more commonly known as the Summer Solstice and is celebrated on June 21, the longest day of the year. While a bonfire might light the way through the night, the celebration is at its height at sunrise on the 21st. The festival welcomes in the darker half of the year as days become shorter and shorter. Celebrations include ritual blessings of thankfulness for the sun and plentiful food.

Lughnassa is celebrated on August 1 and is the midpoint between the Summer Solstice and the Autumn Equinox. In modern Gaelic, Lughnassa is the word for August and neo-Pagans have adopted this name for the holiday. Traditionally, it is called Lammas which translates roughly to loaves of mass. This is a harvest celebration and traditions include making bread with the newly harvested grain.

Mabon is a new name given to the Autumn Equinox celebrated on September 21. This day of equal hours of light and dark creates a magical atmosphere for the celebration of a good harvest. It’s a time of thanks and preparation for the coming months of cold.

Runes are the characters of certain ancient alphabets of the languages of mainly Scandinavia and Britain.  The word rune is said to derive from the words for whisper or secret, so there’s a mysterious quality surrounding these symbols. Runes were used in the casting of spells where the name of an enemy or a love interest would be spelled out carefully using small stones engraved with each rune. Runes were also used as a form of divination or telling the future. The stones would be scattered and read much like tarot cards to determine someone’s future. In Circle of Nine runes are inscribed on important artifacts. To learn the meaning of each rune click here.

Take a look at my inspiration board on Pinterest